Today’s California Catholic Daily has an article about yesterday’s odd action by the San Francisco Board of Supervisors. They wanted to commemorate Roe v. Wade, but apparently got the date wrong:

On December 11, 2012 the San Francisco Board of Supervisors voted 10-0 (with 1 supervisor absent) to pass resolution #121172, declaring January 26 to be a celebration of the Roe v. Wade decision, and expressing support for a “Celebration of Women, Life and Liberty” rally to be held at Justin Herman Plaza. Since the anniversary of Roe v. Wade is actually on January 22, and January 26 happens to be the date of the city’s Ninth Annual Walk for Life West Coast, the resolution seems targeted more at the Walk for Life than a commemoration of Roe v. Wade.

The move is eerily similar to 2005 actions by then-mayor Gavin Newsom and the board of supervisors, which they took in response to the First Annual Walk for Life West Coast.  Those proclamations backfired, encouraging behavior on the part of San Francisco pro-abortion activists of such a nature that even the San Francisco Chroniclewas forced to take notice.  The behavior was so bad that none of the mainstream pro-abortion groups, such as NARAL or Planned Parenthood, chose to associate themselves with the protestors in the following years. 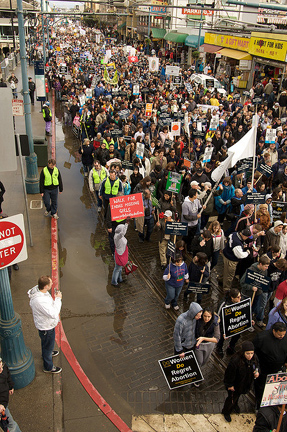 Each year since 2005 the Walk for Life has grown, from 5,000 in 2005 to an estimated 40-50,000 in 2012. The same growth has not been apparent among the protestors: in 2010 San Francisco’s well known photojournalist “Zombie,” (who calls himself pro-choice) estimated a crowd of 80 counter demonstrators. In 2012, another San Francisco photojournalist “Protestshooter” documented the protest of the Walk for Life West Coast at Justin Herman Plaza. He also counted 80 attendees.

“To ignore the pain of millions of women and their dead babies who commiserate 40 years of abortions under the yoke of Roe v. Wade is an admission by the Supervisors that they devalue women who don’t count in their books. Their sense of injustice is a threat to justice everywhere.”

Ms. Georgette Forney, president of Anglicans for Life and a co-founder of the Silent No More Awareness campaign, which supports women who have suffered the pain of abortion, also responded, and she invited the supervisors to join the Silent No Moreevent on January 26 at San Francisco’s Civic Center Plaza:

“The hypocrisy of the San Francisco Board of Supervisors to endorse the Trust Women group while ignoring the voices of women who have been hurt and exploited by abortion is sad and reprehensible.  I challenge the Supervisors to attend the Silent No More Awareness Campaign event that will occur at the same time as the Celebration of Women, Life and Liberty and hear the reality of abortion instead of pro-choice rhetoric.”

This year’s Walk for Life West Coast is expected to draw over a dozen Catholic bishops. Guest speakers include Lacey Buchanan, a young mother whose YouTube video about her blind son went viral and has touched over 11 million viewers;  Elaine Riddick, a woman who was forcibly sterilized at age 14 under orders from North Carolina’s Eugenics Board; the Rev. Clenard Childress,  founder and director ofwww.BlackGenocide.org; and  Kelly and Matthew Clinger, a post-abortive couple who share their story about the heartache and pain caused by life in the music industry, divorce, addiction, and abortion.