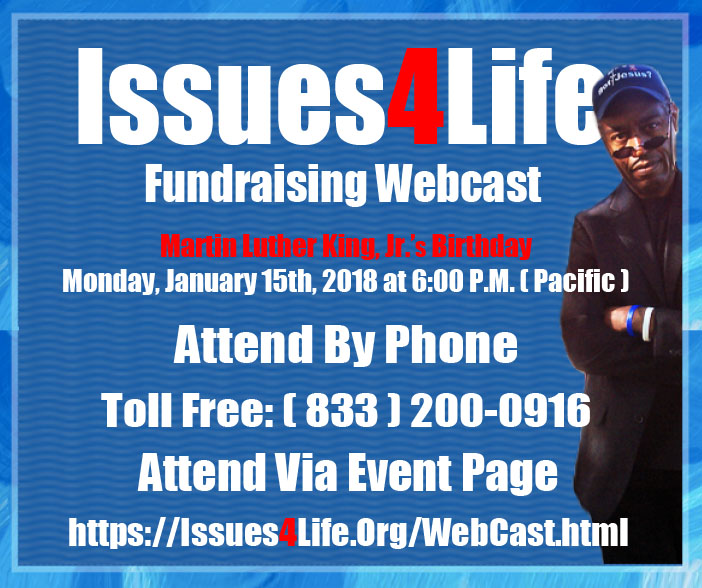 Wow! On Monday, January 15 at 6:00PM, a stellar group of pro-life luminaries will gather in defense of the Black community, and in support of one of America’s greatest pro-life heroes, the Rev. Walter Hoye, Founder and President of the Issues4Life Foundation, at the Martin Luther King, Jr’s Birthday Webcast!

Reverend Hoye is a long-time ally of the Walk for Life West Coast and the 2008 recipient (with his wife Lori) of the St. Gianna Molla award for pro-life heroism.  As most in the pro-life movement know, he was arrested and jailed for 30 days for peaceful pro-life advocacy–his conviction was of course overturned, but Walter, like Dr. King before him, had to go to jail rather than deny truth, justice, and the law of God. He is one of the most respected men in the pro-life movement, as a look at his roster of webcast guests will show:

The webcast will be moderated by David Bereit, Former C.E.O. of 40 Days for Life,

From Reverend Hoye’s mission statement: “The Issues4Life Foundation targets and works directly with Black American leaders nationwide to strengthen their stand against abortion on demand. We are committed to protecting both the civil and human rights of the child in the womb by recognizing the inherent dignity and unalienable rights of all members of the human family, so that in law and in practice every life is valued.”

This is your chance to help this courageous man and his vital ministry! Rev. Hoye says: “This webcast will benefit the ministry of the Issues4Life Foundation. Our goal is to reach one-hundred (100) new donors giving twenty ($20.00) a month tonight.”

You can log in to the webcast here.  Remember, January 15 at 6PM, PST!