The Students for Life of America and their contributions to the Walk for Life West Coast were covered in yesterday’s Catholic World Report:

“Born to Win”: Students for Life of America at Walk for Life West Coast

“We want to make abortion unthinkable and this is the pro-life generation that is going to make that happen.” 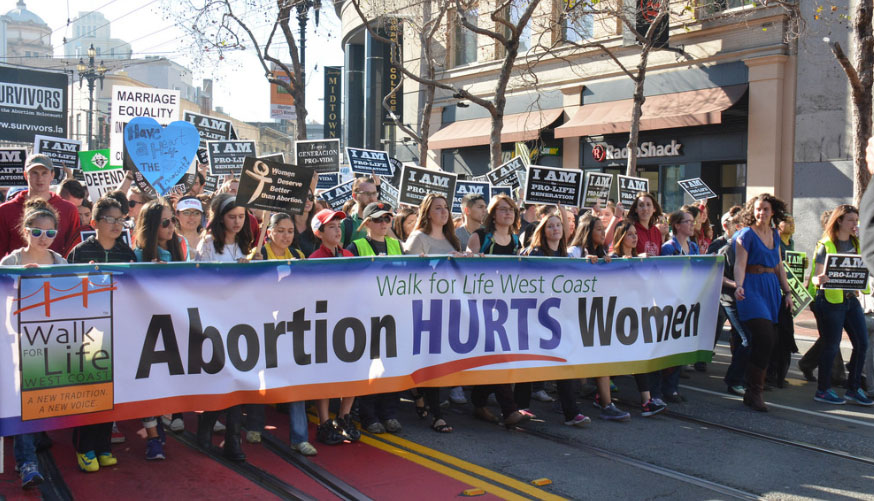 Each year, San Francisco’s Walk for Life West Coast, which began in 2005, has attracted more attendees. The Walk has been defined since its inception by the participation of young people, not only at the Walk itself, but at the ancillary events that have grown up around the Walk. It has become the largest weekend of Catholic and pro-life activism on the West Coast, with special Masses, prayer services, eucharistic adoration, youth rallies and conferences.  One major activist presence at the Walk is the Students for Life of America. On January 23, following the Walk, Students for Life will host a Youth Rally and moviescreening of Voiceless at 5:00 pm at San Francisco’s St. Mary’s Cathedral. On Sunday, January 24, beginning at 9:30 am, Students for Life will host their Third Annual Students for Life of America West Coast National Conference “Born to Win”, also at St. Mary’s Cathedral.

CWR: One of the most important things that has happened in the pro-life movement over the last year has been the series of videos by the Center for Medical Progress exposing the trafficking in the body parts of aborted babies by Planned Parenthood and other abortion businesses. David Daleiden, the founder of the Center for Medical Progress, will be one of the speakers at this year’s Walk. Can you tell us what you think these videos have meant to the pro-life movement?

Tina Whittington: The Center for Medical Progress videos were a game-changer because while many pro-lifers suspected the abortion industry of selling baby body parts, David proved it and proved it dramatically. This time, it wasn’t a pro-lifer saying that Planned Parenthood betrays women – it was the abortionists themselves by admitting they don’t always get full consent from the mother and change up the abortion procedure to get the best organs, which can cause complications for the mother.  This time it wasn’t a pro-lifer holding up graphic images of aborted babies – it was Planned Parenthood themselves holding the tiny, identifiable parts of aborted babies. This time it wasn’t  pro-lifers telling the world that the abortion industry finds any way to make a profit – it was Planned Parenthood high-level executives themselves negotiating the best price for the body parts of aborted babies.

CWR: Students for Life have become a regular presence at the Walk. Two years ago you had the first annual Students for Life of America West Coast Conference. This year will be the third annual conference—and a pro-life Youth Rally as well. What results do you hope to see from the Rally and Conference?

Tina Whittington: We are really excited to have the opportunity to talk to the youth of this nation, to get them energized to go back to their schools and campuses and make it a priority to help their peers facing unplanned pregnancies, to hold baby showers, to pray in front of abortion facilities and to speak the truth about abortion. We want to make abortion unthinkable and this is the pro-life generation that is going to make that happen.