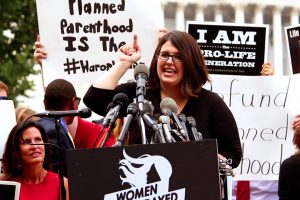 That would be our friend Kristan Hawkins, President of Students for Life of America, and one of the great new young voices of the pro-life movement.

“Students for Life of America president Kristan Hawkins kicks off a national tour this week when she visits Cal-Berkeley to launch her ‘Lies Feminists Tell Tour’ on Thursday, October 26. A well-known abortion debater and advocate for women’s empowerment, Hawkins served on President Trump’s pro-life advisory council during his campaign. The Thursday event begins at 7 p.m. at Wheeler Hall 130 on campus.

“Those who lead feminist organizations and champion the cause of abortion are not about equal rights for men and women like the first wave of feminists, Susan B. Anthony and Alice Paul,” said Hawkins. “Instead they are about pushing an extreme pro-abortion agenda and promoting the corrupt business practices of questionable organizations like Planned Parenthood. We know that college campuses tend to lean liberal and promote pro-abortion messages. Too often, students are told that the ‘right’ to abortion on demand and free birth control, provided at the taxpayer expense, is synonymous with feminism. Students today deserve to know the truth about the history of feminism, abortion, and contraception in our nation. And we are taking our message to campuses nationwide because we are not afraid of a conversation in territory considered favorable to modern, failed feminism….”