We at the Walk for Life West Coast are enormous fans of Fr. Joseph Illo, the Chaplain of Thomas Aquinas College, who led his students at the Walk (that’s him below) this year. So you know we are thrilled to hear this news! From Fr. Illo’s blog:

Appeal for the San Francisco Oratory of St. Philip Neri 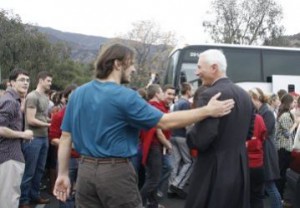 I’ve been serving as chaplain to Thomas Aquinas College for the last two years and feel greatly privileged to work among such deeply Catholic educators and students. Recently, however, San Francisco Archbishop Salvatore Cordileone has invited a priest-friend and me to establish an “Oratory of St. Philip Neri” in his city….

We would begin with two priests and two brothers in a downtown parish with a large rectory, which Archbishop Cordileone has offered us. One of us priests would serve as pastor; we would build up the parish through beautiful liturgy and the lay apostolate, but focus also on evangelizing young adult professionals. The Archbishop has mentioned possibly establishing a Catholic center in one of the larger office buildings with daily Mass and confessions.

A few months ago we were discussing the enormous potential of the Oratory in San Francisco with Archbishop Cordileone. At one point he paused and smiled: “I’m a diocesan bishop, and so I have to think about money, too. I would need you to secure financial commitments to fund part of your living expenses over three years.” I knew he was going to get around to that sooner or later! But as Mother Teresa used to say, “Don’t worry about money. God has lots of it.” If the Lord Jesus and his holy Mother want an Oratory in San Francisco, they will find the money. But of course we have to ask for it….”

They are not asking for money yet, just pledges. If you can help go here and the pledge drive progress can be found here. This is wonderful news for the Archdiocese of San Francisco!