We had a chance to briefly visit the YOU 2016 youth conference at St. Mary’s Cathedral this morning. The conference is a joint project of the Sisters of Life and the Franciscan Friars of the Renewal. The conference room at St. Mary’s was pretty full–hundreds of students in attendance, and more arriving while we were there. 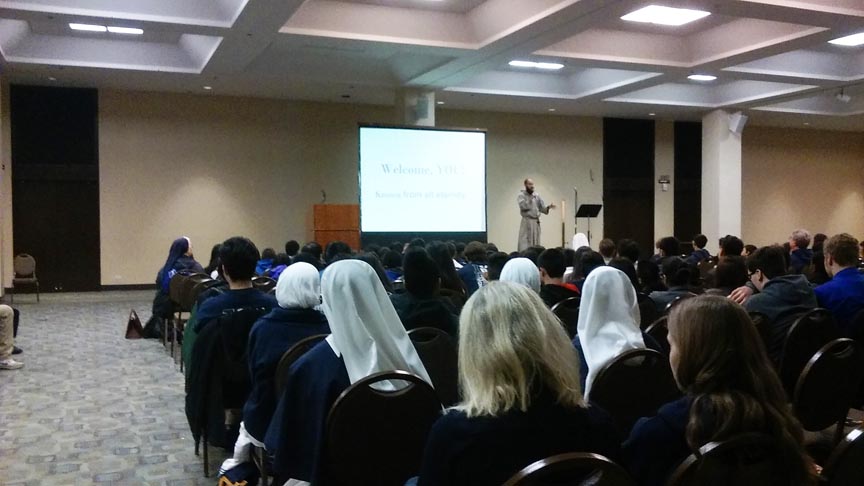 We only had time to stay for the talk by Brother Jonah of the Franciscan Friars of the Renewal, but if his talk was any indication, the students are in for a good experience!

Brother began by asking if there were any Warriors’ fans in the audience, and of course just about every hand went up. He then related some experiences–this is from our notes but should be reasonably accurate:

“As you might know the Franciscan Friars of the renewal work in some pretty rough neighborhoods. Our house is back in New Jersey and we reach out to those in the rough neighborhoods. We play basketball so we sometimes go out and play with the young guys–and they are sometimes pretty rough guys. But we noticed a lot of these guys have blue jerseys–running around in blue jerseys. They’re Warriors fans. 3000 miles away, but they’re Warriors fans. So we asked why–thinking well, Steph Curry is such a deadly 3-point shooter. But actually what they told us was:

“They’re humble, they don’t boast, and they play as a team.”

Brother then said “And the that’s the reason I wear the Franciscan uniform!”

Brother then related the story of his youth: raised in a religious family. But he was rebellious, he drifted away from the faith, a situation that lasted for 8 years. He said he no longer knew who he was. And he begged God for help. And whether it was the Holy Spirit or what he suddenly “…radically knew who he was. A child of God!”

So that night he went back to Mass. It was a youth Mass. And the reading was about the Prodigal Son! And he said what moved him most was “the Father saw the prodigal son coming from far off. And he ran to meet him! saying ‘Welcome home, my beloved son!'”

He then talked some more about how his vocation progressed and closed: “Like I said I came from a religious family. And I was a rebel. People said I was a ‘rebel without a cause.’ But f we rebel, there’s always a cause. It’s because we don’t really know who we are–children of God.”

After Brother finished, one of the Sisters of Life came to the podium. The students then split up into two groups in separate rooms: guys and women, where the Sisters would address the young women and the Brothers the young men.

We had to leave, but look forward to reading a full report on the YOU 2016 Conference in an upcoming issue of Catholic San Francisco.