We love hearing these stories–if you have something you’d like to share from your experience at the Walk for Life West Coast send it to info@walkforlifewc.com. Here’s the first one: 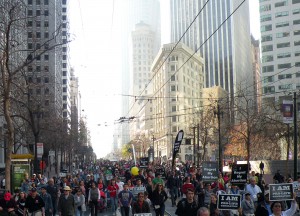 You have to know what happened at the Walk for Life West Coast today. And I have to tell you. Because I was the only person where it happened who can tell you.

At the end of the walk, a group of abortion supporters stood on Embarcadero Street. They held up three 10-foot signs facing the pro-life supporters walking down Market Street toward them. I wanted pictures of the pro-life crowd. The 10-foot signs blocked my view. I had to move in front of the signs for a moment to get my shots. I was close enough to the abortion supporters to hear them talking. After taking my pictures, I lowered my camera. I was only there about a minute. It was just long enough to witness what happened. I moved away from the 10-foot sign-holders. 50,000 pro-life supporters walked toward them. I heard the unmistakable sound of discouragement in their voices.

What happened was that they said, “Let’s go,” “Yeah,” they took down their signs, and walked away.

And here is the second one, a wonderful story about a young mother and her boyfriend who met a sidewalk counselor outside of San Francisco’s Planned Parenthood. The counselor spoke with her, and a second counselor (who shared the story) spoke with her over the phone, sharing the message of hope and life: 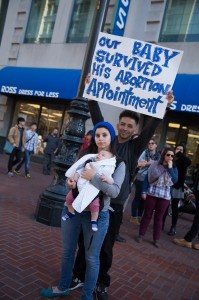 The counselor put me on the phone and I spoke to (the young woman) at great length….I asked her to come to the Walk to show her the pro-life community that loves and supports mothers like her and their unborn babies. They came.

They heard the speakers and had a chance to meet pro-life people that surrounded both her and her boyfriend with love, offering their support. Tears were streaming down her face because she was so moved. (The) counselor was with us, too.  They left feeling very uplifted. If the crowd only knew that their presence made such a difference in the decision of this young mother in crisis– that just such a mother they were fighting for was one among them.

Thank you once again for featuring the (RU486) reversal though Becky and Dr Delgado. Becky’s testimony was delivered with so much joy, she and Zechariah (who waved to the crowd) captured the hearts of everyone there.