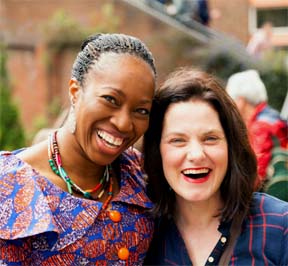 Yesterday, Aleteia.org had an article featuring a wonderful lady who will be one of our speakers at the January 23, 2016 Walk for Life West Coast, Obianuju Ekeocha, the director of Culture of Life Africa. We can’t wait to welcome her! At left is a picture of Obianuju with a past speaker at the Walk, Gianna Jensen. The picture us from the 2015 March For Life UK.

There is a nice video at the Aleteia link, which unfortunately we cannot embed in this post. The great Cardinal Peter Turkson was at the event as well!

A pro-life event in the center of Ghana’s capital Saturday reassured an African activist that “Africa is pro-life territory.”

Obianuju Ekeocha, director of Culture of Life Africa, said that hundreds of people took part in a March for Life, singing and dancing and sharing “the Gospel of Life” with passersby. She said many people on the sidelines of the  three-mile march cheered on the protestors.

The march, which went through the main market in Accra, was “beautiful and lyrical,” Ekeocha said. “I have said it a thousand times… Africa is indeed pro-life territory.”

The march was part of a series of pro-life event that the Ghana Catholic Bishops Conference held for the first time in Accra. Ghanaian Cardinal Peter Turkson, president of the Pontifical Council for Justice and Peace, was one of several speakers at the conference, which was held in Accra’s Holy Spirit Cathedral.

Ekeocha urged participants to work towards ejecting international pro-choice agencies from Ghana, where they are promoting condom use and abortion in some hospitals, schools and villages and seeking to normalize homosexual relations.

The Nigerian-born Ekeocha, who is now based in the UK, reflected last week on writing an open letter to Melinda Gates three years ago. In that letter, Ekeocha said that Gates, the wife of billionaire founder of Microsoft Bill Gates, planned to collect pledges for $4.6 billion in order to ensure that African women were less fertile, less encumbered and more “liberated.”

“But Melinda Gates did not rethink her project,” Ekeocha said last week.