Although the Trump Administration rescinded the obscene HHS Mandate, the Little Sisters of the Poor have been hauled back into court by California’s creepy Attorney General. 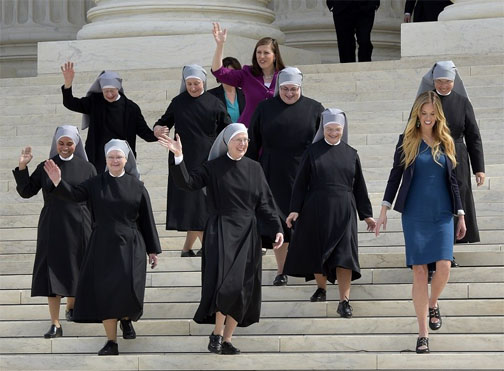 They will go to court Tuesday, December 12, to defend themselves against a lawsuit by Attorney General of California Xavier Becerra, who is suing to take away the Sisters’ religious exemption from a Health and Human Services rule. In early October, HHS issued a new rule that protects religious non-profits like the Little Sisters of the Poor from providing services like the week-after pill in their healthcare plans in violation of their faith. The Little Sisters’ four-year legal ordeal was close to an end. Now the state of California is suing HHS to take away the Little Sisters’ religious exemption. The Sisters will be represented by the Becket Fund, who are fighting to ensure that they can continue their vital ministry of caring for the elderly poor without violating their faith.

Let’s show up to be a support to the wonderful Sisters!