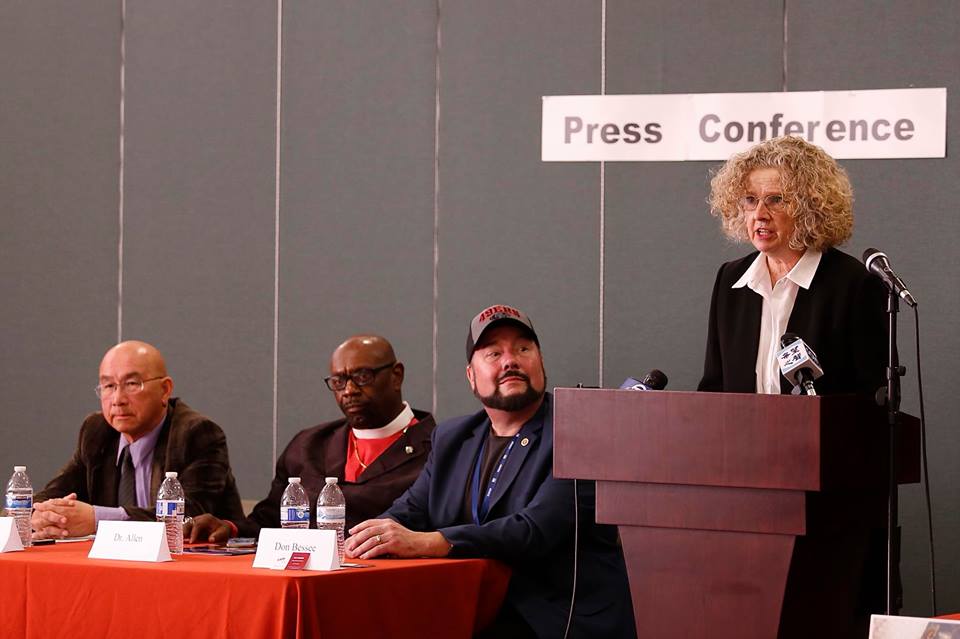 Ms. Schmalz at a Jan. 31 Press Conference urging Californians to fight against the recent legalization of marijuana. Prescient: just yesterday 10 middle-schoolers were taken to the hospital after consuming marijuana.

Valerie Schmalz, award winning reporter and associate editor for Catholic San Francisco Newspaper, and a longtime Walk for Life West Coast volunteer, has been named the new head of the Department of Human Life and Dignity for the Archdiocese of San Francisco.

Valerie told CSF’s Tom Burke: “I became a journalist because I love the fray, and because it is a way to work for justice. This job is a new direction but for me builds on that desire.”

Education and experience have prepared Valerie well for her new post. She holds an undergraduate degree in government from the University of San Francisco and a graduate degree from the School of Foreign Service at Georgetown University in Washington, D.C. She has served as a secular journalist including work in print and television news in Alaska, Delaware and Maryland.

Supporting Archbishop Cordileone “in his public policy and social justice priorities” will be Valerie’s first front in the new job, she said.

“We are fortunate in the Archdiocese of San Francisco to have a leader who is truly faithful and courageous as a man and as an archbishop, and I hope to help in whatever way I can to support his priorities,” Valerie said.

“Social justice begins with the dignity of the human person, the protection of life from conception to natural death and is preserved in society by creating an atmosphere where the family based on the marriage of one man and one woman can flourish,” Valerie said. “From those principles flow all our social justice priorities as a Catholic Church including immigration reform and accompaniment of immigrants, religious liberty, care for creation, opposition to all forms of social and economic injustice, and the full spectrum of pro-life issues.”