Veronica tells us that His Eminence Metropolitan Joseph, of the Antiochian Orthodox Christian Archdiocese of North America, who leads over 275 cathedrals, churches and missions in the United States and Canada, has blessed a pilgrimage to the Walk for Life West Coast!  This pilgrimage is being organized through the Young Adult Ministry program, but is open to faithful of all ages.

For information, and to register, go to www.DlawYoungAdults.com.  The pilgrimage includes, among other activities, attending the Walk for Life and visiting the relics of Saint John Maximovitch at the Holy Virgin Cathedral on Geary Boulevard here in San Francisco.

The following video was prepared in 2015 within the Antiochian Archdiocese as a promotion for attendance at the Walk for Life West Coast.  It features Father Josiah Trenham of St. Andrew Orthodox Church in Riverside, California.  Father Josiah is currently one of the strongest proponents within Orthodox Christianity for the Church’s teachings on the sanctity of life.  He also reaches outside the Orthodox Christian community.  You can view his message here:

There is fantastic news within the Greek Orthodox Archdiocese of America as well.  After issuing invitations to northern Californian bishops and priests, His Eminence Metropolitan Gerasimos has responded to our invitation to join us.  Metropolitan Gerasimos is father and shepherd to over 150,000 Greek Orthodox Christians in the Western United States and Alaska, and while His Eminence will not be able to attend personally—another incredibly busy archbishop —he has designated Fr. Aris Metrakos, of San Francisco’s Holy Trinity Greek Orthodox Church, as his representative at the Walk!

Walk for Lifers will no doubt remember our good friend Fr. Aris, who joins us as often as possible, who gave the invocation at the Walk for Life West Coast in 2012, and now for 2017 will be Metropolitan Gerasimo’s representative. 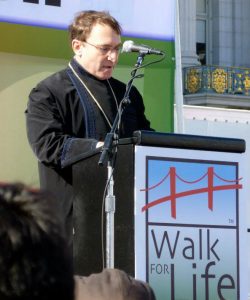 When we asked Fr. Aris to give the invocation in 2012, he said, “I was greatly humbled and honored to receive this invitation.  I have the greatest admiration and respect for all those who have been on the front lines of this life-or-death struggle to turn our culture away from its indiscriminate march toward moral oblivion. I regard this prayer as not some sort of a perfunctory beginning to a civic gathering, but a recognition that this unimaginable evil can only be overcome by the grace of God…Abortion-on-demand has shredded the moral fabric of our society by encouraging promiscuity, obliterating the notion of personal responsibility and accountability, and making selfishness a legal right. It tears asunder literally the bodies of the unborn and metaphorically the hearts and souls of the women who submit themselves to this heinous barbarism. It makes a mockery of men’s honor and the medical profession’s nobility, while exposing the duplicity and opportunism of the majority of the political class.”