Dr. Kevin Roberts is the President of Wyoming Catholic College. He talks the talk and walks the walk–he has led his students to the Walk for Life West Coat before, joining them not only at the Walk but sharing the hardship of sleeping on a hard wooden floor. He sent out this lovely, thoughtful letter yesterday. 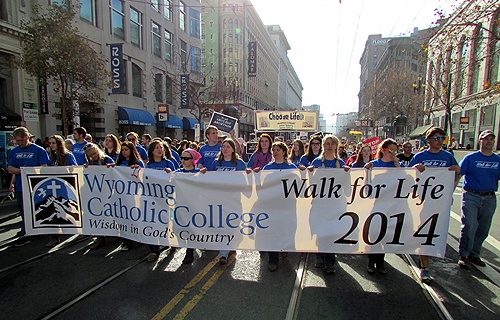 Why we March for Life

“Push back against the age as hard as it pushes against you. What people don’t realize is how much religion costs.  They think faith is a big electric blanket, when of course it is the cross.”–Flannery O’Connor .

in San Francisco, the zeal of so many people marching together for life is palpable.  For that reason alone, I believe participating is crucial, for doing so not only furthers the effort to end abortion but also provides participants with more hope about the trajectory of modern culture.  This “shot in the arm” can be translated into our local efforts with various causes, mitigating the hopelessness that so many feel about the culture today.

This reality is often ignored by the naysayers who are right-minded about ending abortion but who believe that public displays like the March for Life are useless in ending the scourge.  Such attitudes ignore the results of these peaceful displays of solidarity: since 1987, when the first March for Life began, the proportion of Americans who describe themselves as pro-life has increased from a paltry minority to a slim majority.  Though a number of factors could be responsible, the attendant growth in the D.C. March—more than 600,000 are expected tomorrow—and the founding of similar marches all over the country—most notably, in San Francisco, where 70,000 are expected on Saturday—indicates the success of coordinated, persistent efforts to reclaim the public square for what is true, good, and beautiful.

Moreover, in the last few years, the organizers of the various pro-life marches have been much more effective at parlaying public protest into discernible political momentum.  Consider, for example, the progress of pro-life legislation, albeit incremental, in state legislatures around the country; these successes, paired with the reinvigorated commitment of Congress to tackle the issue in 2015, demonstrate that persistence in the public square can work for “conservative issues” as well as it has worked for the American Left.  We can only hope and pray that over the next several years, we witness a similar development with marriage.

Given the benefit to the common good of young people participating in the pro-life marches—as well as the benefit to the young people themselves from seeing so many of their peers walking in solidarity for life—Wyoming Catholic College is proud to participate.  More than half our students will travel the 2,000 miles round-trip to participate in the West Coast Walk for Life, several more will join the Cheyenne Walk for Life, and I will meet a number of WCC alumni in Washington for the “big” march tomorrow.

So doing reminds us that a Catholic liberal arts education does not occur in a vacuum.  The unique combination at WCC of tradition, evangelization, and learning that is both deeply contemplative and experiential may very well offer the most potent recipe for the kinds of committed disciples—the “game-changers”—that our culture so desperately needs.

You can learn more about Wyoming catholic College here.