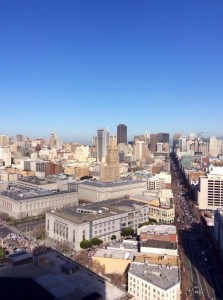 That was the comment made last year by Walk for Life West Coast co-chair Dolores Meehan in response to complaints by people who were caught unaware in the traffic as a result of the magnitude of the Walk for Life West Coast. We sympathize, of course, with people caught in traffic. But it immediately raises the question: why were they unaware? They were (and are–people had similar problems on Saturday) unaware because San Francisco’s mainstream media fails to fulfill its responsibility. Today, Howard Duncan, at Catholic Stand, offered these observations:

“The press coverage before, during and after the Walk was minimal, with several online news companies running the Associated Press story or the one from PR Newswire. As usual, there were familiar lines about how the San Francisco police did not immediately provide an official crowd estimate, but at one point marchers stretched across more than a mile of Market Street, the liberal city’s main thoroughfare…

One of my favorite quotes comes from the NBC TV affiliate in San Francisco.  ‘Tens of thousands of demonstrators gathered in San Francisco Saturday for an anti-abortion march and rally, and it’s affecting traffic in the city.’  Other  ominous warnings about ‘sluggish traffic’ and ‘heavy traffic’ and ‘slow traffic’ and ‘impact on traffic’ just about exhausted the traffic adjectives available. A couple of sentences stand out though. ‘Early Saturday, a massive crowd gathered at Civic Center Plaza for an anti-abortion rally before marching down Market Street to Justin Herman Plaza. […] A much smaller group of about 100 pro-choice demonstrators gathered at Powell and Market streets…’  One would hope that the meager attention given to these important facts by all media outlets except pro-life ones, would prompt a thinking person to consider the importance of this march to our society.”