Thoughtful reflections from our good Archbishop on the Walk for Life West Coast. 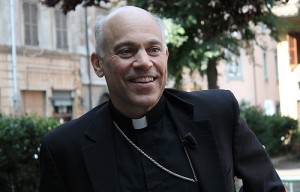 San Francisco, Calif., Jan 29, 2014 / 04:05 am (CNA/EWTN News).- The Walk for Life West Coast held each year in San Francisco is an important opportunity for those in the western U.S. to demonstrate their solidarity with the unborn, according to the city’s archbishop.

“The main purpose it serves is for those who can’t get back to Washington for the March for Life, that we’re still able to gather all of us together…and by virtue of our numbers, bear witness to the strength of the pro-life movement,” Archbishop Salvatore Cordileone told CNA after celebrating a Mass for the pilgrims who had come the Jan. 26 event.

“I know there are walks in a lot of different cities, but I think it’s important to have one key event on the east coast, and one one the west coast: it’s a long ways to the east coast – sometimes people from back east don’t realize that.”

Many of the some 50,000 participants in Saturday’s walk were university students, coming from Berkeley across the bay, Thomas Aquinas College downstate, and even from Wyoming Catholic College, four states away. Alongside Catholics were Lutherans, Anglicans, Baptists, and agnostics as well.

Archbishop Cordileone noted the importance of the Walk’s pro-life witness “especially here in San Francisco, which is always at the forefront of these social changes which are not always in keeping with the greatest respect for human life.”